SHAPES FROM OUT OF NOWHERE: CERAMICS FROM THE COLLECTION OF ROBERT A. ELLISON JR. At the Metropolitan Museum of Art, NY, NY through August 2021

Thrilled and grateful to be included in this show, which marks the third major gift of ceramics to the museum from esteemed and visionary collector, Robert A. Ellison. Pictured is "Sidestepper", one of my works on view in the exhibition.

Pleased to be included in this magnificent book : "Shapes From Out Of Nowhere : Ceramics From the Robert A. Ellison Collection". It accompanies an exhibition of the same name currently on view at the Metropolitan Museum of Art in NYC, through August 2021. Essays by Robert A. Ellison Jr., Glenn Adamson, Into by Adrienne Spinozzi, Artist bios by Elizabeth Essner. All pics by Robert A. Ellison himself. Book by August Editions
"In the Moment" at Elizabeth Harris Gallery (529 West 20 St. NYC) March 30 - May 11 2019

with essay by Nancy Princenthal

Sat, April 13, 3:30-5pm: Conversation with Elisa D'Arrigo and Nancy Princenthal as one of the events celebrating the 25th anniversary of Civitella Ranieri -Civitella XXV #3

The Elizabeth Harris Gallery is pleased to announce in the moment, a show of recent ceramics by Elisa D’Arrigo. In this exhibition, her 10th with the gallery, D’Arrigo continues to consider and expands upon the possibilities for integrating painting, drawing, improvisational process and animated sculptural form within the context of the ceramic vessel.

The works begin as variously sized hollow and hand-built cylindrical forms that the artist then manipulates and combines while wet, in a period of intense activity. The “postures” that result allude to the body in a gestural and even visceral manner. They exude a figural presence, and their hollowness evokes the notion of interiority, and animation from within. The artist has stated that she is compelled by the way we inhabit and imagine our bodies from the inside out, and by the psychological and corporeal aspects of containment. The inside creates the outside, and visa versa.

D’Arrigo’s penchant for in the moment decisions yields forms that seem surprising, yet oddly familiar. The works convey the intrinsic humor of unexpected asymmetries merged with densely glazed “surfaces that run with an impossible wealth of color, pattern and texture...Variously nubby and scaly, striated and pocked, the resulting surfaces evoke polished gemstones, luster glass, patterned knits and flesh both tender pink and charred, mineral black.” (Excerpted from accompanying catalog essay by Nancy Princenthal).

Princenthal describes the works as a “series of alarmingly potent little ceramic figures that engage our propensities for reverie, humor and, perhaps most satisfying, deep human recognition.”

D’Arrigo’s work is included in the collections of The Mead Art Museum, The High Museum of Art, The Samuel Dorsky Museum of Art, The Mint Museum of Art and Design, The Weatherspoon Art Museum, and Dieu Donne Papermill. Reviews of her work have appeared in several publications including Hyperallergic, The New York Times, Art in America, ArtNews, Sculpture, Partisan Review, ArtPapers, and The New York Observer. Residencies include Civitella Ranieri, Yaddo, and the MacDowell Colony. 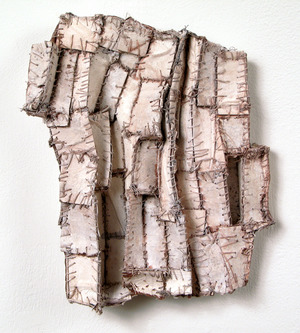 For Italian immigrants and their descendants, needlework represents a marker of identity, a cultural touchstone as powerful as pasta and Neapolitan music. Out of the artifacts of their memory and imagination, Italian immigrants and their descendants used embroidering, sewing, knitting, and crocheting to help define who they were and who they have become. This book is an interdisciplinary collection of creative work by authors of Italian origin and academic essays. The creative works from thirty-seven contributors include memoir, poetry, and visual arts while the collection as a whole explores a multitude of experiences about and approaches to needlework and immigration from a transnational perspective, spanning the late nineteenth century to the late twentieth century.

At the center of the book, over thirty illustrations represent Italian immigrant women's needlework. The text reveals the many processes by which a simple object, or even the memory of that object, becomes something else through literary, visual, performance, ethnographic, or critical reimagining. While primarily concerned with interpretations of needlework rather than the needlework itself, the editors and contributors to Embroidered Stories remain mindful of its history and its associated cultural values, which Italian immigrants brought with them to the United States, Canada, Australia, and Argentina and passed on to their descendants.